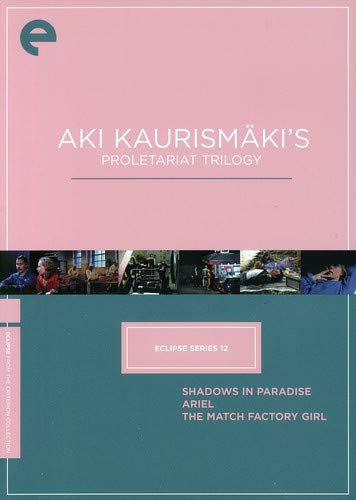 The poignant, deadpan films of Aki KaurismÃ¤ki are pitched somewhere in the wintry nether lands between comedy and tragedy. And rarely in his body of work has the line separating those genres seemed thinner than in what is often identified as his Proletariat Trilogy, Shadows in Paradise, Ariel, and The Match Factory Girl. In these three films, something like social-realist farces, KaurismÃ¤ki surveys the working-class outcasts of his native Finland with detached yet disarming amusement. Featuring commanding, off-key visual compositions and delightfully dour performances, the films in this triptych exemplify the talents of a unique and highly influential film artist.

Editors of the Eclipse series appear to taking some critical political stances these days judging from their selection of Aki KaurismÃ¤kiÂs Proletariat Trilogy as follow-up to the equally dour Larisa Sheptiko boxed set. Whereas SheptikoÂs films portray Soviet soldiers and workers toiling in war-ravaged Russia, KaurismakiÂs films are set in and around bleak working-class neighborhoods in Helsinki, and star characters who resort to lives of crime because it is impossible to make ends meet. However, similarities between the directors more or less stop there. KaurismakiÂs more modern social critiques mercifully employ deadpan humor to rescue the viewer from utter hopelessness and to shield one from the bitterness his characters suffer. Like Robert BressonÂs films, KaurismakiÂs rely upon understated acting and long scenes in which the camera hardly moves, to allow plot development that is slow, emotionally resonant, and ultimately realistic. His three films included here are mid-career works that share basic plots and even actors, though, of course, each film merits close viewing. Shadows in Paradise (1986) is the oldest film, and sets in motion the archetypal tragic character who tries and fails at earning money honestly under depressed economic conditions. Opening with shots of dumpsters being emptied during a snowstorm, one senses instantly that NikanderÂs (Matti PellonpÃ¤Ã¤) life may be the ultimate drag. When his partner invites him to start a new company, using the slogan "Reliable garbage since 1968," and Nikander replies, "But thatÂs now," it becomes clear that neither he nor his peers are extremely bright. His new girlfriend Ilona (Kati Outinen) leads an equally dreary life as a grocer, and the pace speeds only slightly. Not until Nikander meets Melartin (Sakari Kuosmanen) in prison does one experience his adventurous side. Similarly, Ariel (1988) opens with a wry scene starring Taisto Kasurinen (Turo Pajala), a Finnish coal miner who witnesses his fatherÂs suicide after his father wills him a fantastic vintage car. Taisto, dreadfully impoverished, leaves for the city, where he meets Irmeli (Susanna Haavisto), a kind-hearted woman who doesnÂt necessarily have ambitious taste in men. As Taisto digs himself deeper into trouble with the law, no thanks to his friend Mikkonen (Matti PellonpÃ¤Ã¤), Irmeli chooses loyalty over protecting her son from a man who is ultimately a criminal.

The most compact and stylistically impressive of Aki KaurismÃ¤ki's perversely minimalist Finnish comedies, "i"The Match Factory Girl stars his blond, blank-faced Garbo, Kati Outinen, as a downtrodden factory worker whose attempts to discover love and companionship are constantly thwarted by her possessive parents and a succession of cloddish, exploitative men. KaurismÃ¤ki's deadpan style--the carefully inexpressive acting, motionless camera, and rigidly geometrical compositions--avoids both sentimentality and sarcasm. Although the girl's plight is taken seriously, there is something in the extremity of the situations, and in the lovingly depicted hideousness of her Helsinki home life, that is irresistibly comic. Inspired by the Tiananmen Square uprising, the match factory girl resolves to take a revolutionary stand, arms herself with a packet of rat poison, and sets out for revenge. The video includes an equally hilarious music-video rendition of "Those Were the Days" by KaurismÃ¤ki's house band, the Leningrad Cowboys. In each of these films, the director relies on the publicÂs understanding of poor economy to order empathetic viewing. If one doesnÂt prescribe to blaming government for societal hardships, his characters seem pathetic and borderline idiotic. This gray area between sympathy and contempt is Kaurismaki territory, and viewing his films reminds one how the personal is political. --Trinie Dalton and Dave Kehr

From the ground up...

Our system designers will consult with you to provide the design and documentation needed for you, your architect, or builder.

When a cable needs running...

Cableman’s team of professional installers will run every cable you require in your home, and install every bit of hardware, light and power that you need.

We have a dedicated team ready  to make sure that your home has everything you need at completion. Our experience makes it work for you and your builder.

Since the beginning of home automation...

Your home, your tech, our expertise.

Our client focussed approach ensures that you get what you want. Designed, implemented and set up the for the way you live.

Let our team work for you

Cableman’s vision is to give you, your architect and builder the most seamless experience in smart home cabling and design.

Our staff are dedicated and qualified in all of our integrated and smart home systems, and will listen to what you want to have in your home, and how you want to work it.

Call us or email to find out how we can work with you.

Cableman is an independent business run by Anthony Elbaum.

Founding and Managing Director, Anthony spent 10 years in the Royal Australian Navy as a communications technician. Entrusted with the maintenance of electronics in a top secret communications centre during the Gulf War and part of the commissioning crew on HMAS Melbourne, he is no stranger to the need for security and discretion that he ensures for all Cableman clients. His knowledge across all areas of on site works is well respected and he can still today be found attending to customers technical queries. When not at work he is fishing, coaching footy, cooking or with family and friends.

Our dedicated team of techs include qualified electrical, data, and security installers. They are the best in the industry and form an essential part of the Cableman service.

Industry Certified and specialising in Audio Visual, Control, Integration, Networking WIFI and Surveillance. Glenn has been working in Smart Homes and Automation for 16 years, working on and delivering 300+ projects. Loves the Tigers.

Emma is a certified Integriti Security specialist, with a wide ranging experience in managing projects of every nature, whether Data, Security, AV and Access control systems. All while managing the office and making sure everyone gets paid!

Luke has been been senior programmer at Cableman for 15 years now. Specialising in Crestron and SIMPL, CBUS and third party integration, his knowledge of the inner workings of a Smart Home are limitless. Will most likely have the cricket on a screen somewhere near him.